Maroon waistcoat with their gang's logo.

The Warriors are the titular main protagonists and fictional New York City gang in 1979. Reigning over their home turf of Coney Island in Brooklyn, they have built a reputation of one of the toughest gangs in New York City. Their strength comes from the fact that each member brings their own unique toughness and skills to the gang. When brought together as a whole, the Warriors are able to make it through the perils of New York City gang warfare.

The Warriors have no dress code, besides wearing their maroon waistcoats. In the film, the logo is a skull with wings, while in the video games and comics, it is a flaming snake. Known businesses of the gang include extortion, mugging, and the sale of stolen goods such as car radios and jewellery.

The Warriors' exact date of formation is not known, but it is known that the founding members were Cleon and Vermin, and that they decided to create the gang sometime after April 16, 1978. On that date the Destroyers' leader, Virgil, set up a deal between him, Cleon, and Vermin with the Satan's Mothers. When Virgil didn't show, Cleon decided that they should just do the deal themselves. After the deal went sour (the product was fake, so the Satan's Mothers thought they were being set up), Cleon and Vermin ran into Tack's warehouse, where they snuck their way through to the end. After beating the Satan's Mothers' leaders, Spider and Tiny, the two decided to go back to the Destroyers' hangout and confront Virgil. As it turns out, Virgil set them up because he thought that Cleon was trying to go behind his back and take over the gang. After a heated discussion, Cleon and Vermin leave. By May 6, 1978, Cleon and Vermin had formed the Warriors and started wearing their own colors.

In the events of the film, Cyrus is killed by Luther, who blames it on the Warriors as Fox had seen him. The Warriors then have to make it from the Bronx to Coney Island while avoiding getting wrecked. They make it back, but at a price; Cleon and Fox are killed, and Ajax is arrested.

As the title gang, the Warriors appear in every mission, with the exception of Roots, where only Cleon and Vermin appeared as Destroyers, since the Warriors have not yet been formed at that time.

In the novel, the Warriors are known as the Coney Island Dominators, and its members are all Hispanic and African-American. In the novel there are 7 known members of the gang that go to the meeting, as opposed to the 9 members in the film.

After a brawl with the Hi-Hats, the Warriors stage a war council, where they decide to break Ajax out of prison. At the prison, the Warriors are met by the Gramercy Riffs, who agree to work with them, since two Riffs are also incarcerated. The two gangs stage a fake brawl to lure the guards outside. Once the guards come outside, they are jumped by the gangs while Swan heads inside to free Ajax. Once the Warriors see that Ajax is free, they retreat back to Coney Island where they celebrate their victory.

Running from the Turnbull AC's 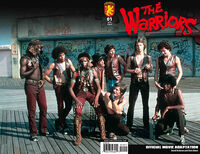 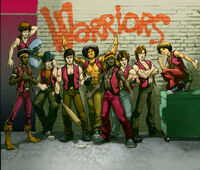