The Turnbull ACs are a fictional New York City gang in 1979. They're a bunch of anti heroes; tough, crass anarchists, looking to rock or rumble any chance they get. One of the heaviest sets in the city, these skin-headed thugs are a serious outfit to contend with.

The Turnbull AC's are a mixed-race, skin-headed gang and are known to travel en masse in an old, green school bus. They are a large, violent gang, often armed with chains, machetes and two-by-fours. Their territory spans Gun Hill to Pelham. They are one of the most powerful and dangerous gangs in New York. While they do not have the organization of the Gramercy Riffs, their brawn has given them a formidable reputation.

Their strength lies not only in their penchant for violence, but also in their sheer disregard for human life. Their reputation is such that they are known even to The Warriors, a small-time gang from the other end of the city, whose knowledge of other well-known gangs is repeatedly shown to be critically lacking. In the film, they wisely choose flight over fight, and even in the game, they will generally only engage the Turnbulls when absolutely necessary.

In the film, the Turnbull AC's appear at the huge meeting up at the Van Cortlandt Park. Once Cyrus was shot, they went out looking for the Warriors, after hearing about the hit on the radio. They drove their bus around the area and spotted them dashing towards the subway and chased them, but couldn't catch them. They then sent word to the Riffs that they blew their chance.

In the game, they appear in Boys In Blue, where they start charging the NYPD, who are cleaning up the streets after the murder of a cop. A Turnbull AC then gets hit by a train, causing somewhat of a distraction for the police. Snow and Fox (who Cleon had sent to the Riffs gambling club) are captured and the Turnbull AC's are spotted in a cutscene laughing with Birdie about how he's going to "roll over their nuts" when he gets back. Instead, they are recovered by Cochise, Vermin and Cowboy, and reinforcements arrive. The Turnbull AC's are now found at the Red Devil, partying hard. Once the Warriors break in, Cochise demands where Birdie is, but the Bulls refuse to say anything. Once the Bulls are taken down, the bartender tells them Birdie's location. Birdie is now found in a factory talking to workers, and is interrupted by the Warriors. Birdie spots them and begins shooting. He fails to kill them, and falls backwards off a platform, and near some train tracks, dying on impact.

They appear at the big meeting, in Desperate Dudes. Once Cyrus was shot, they went out looking for the Warriors, after hearing about the hit on the radio.

Overall, the Turnbulls should not be taken lightly. Out of all other gangs - minus the Riffs and, perhaps, the Warriors - they're notably combo-happy and, once attacking, usually will continuously unleash a mighty beating and will often perform heavy grapples and tackles mid-attack, and won't hesitate to throw you into objects, including speeding trains. They're especially dangerous with weapons. Be warned, their tag-team attacks deal enormous damage and often, help or no help, constantly kick and mount you before you can get off the floor. They're good at reversals, grapple-counters and putting up resistance in general. Some higher-ranking members will perform special roundhouse kicks. They don't fall from strikes. While they're not as heavily-built as Cobb and The Satan's Mothers, or as skilled as gangs like the Riffs and Warriors, their ferocity, toughness, power, stamina, unpredictability, heavy numbers, and their constant, non-stop attacks, can - and very often will - overwhelm practically every gang in the game. They're considered feared, even by the Riffs, for a reason. 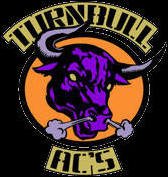 The AC's original appearance with the movie logo in the game.

Add a photo to this gallery
Retrieved from "https://thewarriors.fandom.com/wiki/The_Turnbull_AC%27s?oldid=20171"
Community content is available under CC-BY-SA unless otherwise noted.