The Warriors
The Satan's Mothers
The Hurricanes

The Savage Huns are a fictional New York City gang in 1979. They are large in numbers, skilled in Martial Arts, and can withstand a great deal of physical punishment. They are affiliated with the Triads and deal in extortion, loan-sharking and pimping.

In the film, the Huns are seen waiting for a train at the station in Chinatown. They appear in the crowd at the big meeting.

They appear in Scout's Honor. When Fox and Vermin wear insulting shirts in Chinatown, which read "Fuck U Huns!", the Huns fought them and lost. Once the street vendors and some stores are destroyed, an army of Huns run through the neighborhood and chase Fox and Vermin, but the two escape, either by hiding or fighting their way through. The Huns find out that their Triad associate is being attacked, the Huns will fight Fox and Vermin. The Huns' errand boy is receiving protection money from a shopkeeper, he spots them and runs off to inform Ghost, the leader of the Huns. Ghost summons the Huns to take them out, but the Huns fail, so Ghost fights them himself, but fails to take them out. Once Ghost is defeated, the errand boy runs off, but is beaten up as well.

They also appear in Blackout, where they are seen in the second part of the mission, trashing a store, before they run off.

When the Riffs spread the word about the big meeting Cyrus is holding, they are seen talking to one of the Riffs in the All-City mission. They can also be seen in Desperate Dudes, going to, attending, and leaving the meeting. 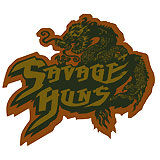 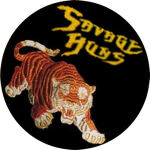 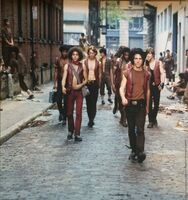 The Mongols (Savage Huns) watch the Warriors march through their territory in a deleted scene.
Community content is available under CC-BY-SA unless otherwise noted.