The Orphans are a fictional New York City gang in 1979. They are a small time outfit that keeps trying to move up by boasting about raids that never happened. At the bottom of the minor leagues, and thus being considered as the weakest, they try to make up for being soft by swarming with numbers; but a crew that can't rumble doesn't have much of a future.

The Orphans are perhaps the weakest gang in the city, forcing them to resort to cunning yet cowardly methods. Their posse only consists of a mere thirty members, making them one of the smaller, close-knit gangs in New York.

The Orphans did not even know of the Gramercy Riffs meeting, thus indicating they are not on the network.

Even if the Orphans were on the network, they most likely wouldn't have been able to attend the meeting. Edge of the Saracens stated that only the "heaviest" sets in the city would be at the meeting, though this could have been an exaggeration.

The Orphans are multi-ethnic in membership.

The Orphans were founded sometime before May 19, 1979, and adopted Tremont in the Bronx as their territory. The Orphans' leader was Sully, and their main hangout was the Orphanage.

On May 19, 1979, the Orphans falsely reported that they had defeated the Coney Island-based gang the Warriors. In retaliation, Warlord Cleon and scout Fox led a group of the Warriors' New Bloods to Tremont to battle against the Orphans.

See also: The Warriors (Film), No Permits, No Parley

When Cyrus and the Gramercy Riffs called a conclave of New York City's street gangs in Van Cortlandt Park, the Orphans were not invited, as they were not on the Riffs' network. At the meeting, Cyrus was killed, and the blame for Cyrus' murder was placed on the Warriors. The Warriors attempted to return home to their territory in Coney Island, but a fire meant that their train had to stop in Tremont. Sully and the Orphans confronted the Warriors as they made their way through Tremont; Sully parleyed with the Warriors' new Warlord Swan and Fox, but these talks broke down when Mercy appeared and challenged Sully's manhood. Sully asked the Warriors to remove their vests as they passed through Tremont, but the Warriors refused this request, and the Orphans withdrew to a nearby building.

Mercy followed the Warriors as they made their way through Tremont, but they later stopped to confront her. As the Warriors confronted Mercy, a large group of Orphans attempted to ambush the Warriors. However, Swan threw a Molotov cocktail onto a nearby car, with the ensuing explosion distracting the Orphans and allowing the Warriors to escape with Mercy.

In the Film[edit | edit source]

On their way back to Coney, the Warriors had to go through the Orphans' turf. Swan explains to them that they were on their way home from the meeting, but their train was stopped because of a fire, so they had to go on foot. Sully was about to let them go until Mercy cut into the conversation and told Sully that doing that is a bad reputation for the Orphans. Sully told the Warriors they had to take of their colors and walk as civilians. Swan tells Sully off and he goes to go get reinforcements. Sully returned with a bunch of Orphans so they can fight, but Swan threw a Molotov cocktail at a car next to them to scare them off and wasted some members, and the Warriors flee to the next station.

In the Game[edit | edit source]

The first appearance of the Orphans in the video game is in Real Heavy Rep. When Cleon and his Warriors find out that the Orphans lied about taking out the Warriors, Cleon takes Fox and the new bloods to Tremont, where they fight several Orphans and defends Sully's car.

The Orphan's don't appear again until No Permits, No Parley, after the Warriors flee from the Turnbull AC's. Just like in the movie, Sully asks peacefully for the Warriors to take off their vests, but Swan refuses. After a short walk to the next station, Sully will be waiting for the Warriors with all of his Orphans. Defends all of Sully Jesse and his Orphans, and move onto the red marker, the following cutscene ending the Orphans until the final cutscene in the mission.

In the Novel[edit | edit source] 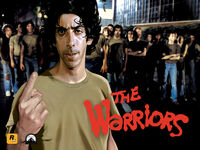 Artwork
Add a photo to this gallery
Retrieved from "https://thewarriors.fandom.com/wiki/The_Orphans?oldid=20452"
Community content is available under CC-BY-SA unless otherwise noted.