The Boppers are a fictional New York City gang in 1979. Although they are a softer set that grooves with style instead of muscle, they are tough enough to keep other gang colors off their turf. The Boppers see themselves as keeping Harlem smooth and stylish.

The Boppers are an all African-American gang from Harlem. They love the nightlife, and their usual hangout is a disco hall named Club 45. They are also known to frequent The Pocket Pool (pool hall), The Roman Disco (nightclub), and The Black Cat Lounge (strip club).

The male members of the gang mostly speak in jive and wear purple waistcoats and fedoras, purple or black long sleeved dress shirts, sometimes with a tie, cream colored trousers, and very shiny black dress shoes. Their lieutenants wear light purple fedoras and gold/yellow long sleeved dress shirts with their vests. Most of the male members seem to have very high opinions of themselves, as they can often be heard talking about hot dates they've had recently, or simply how good they think they look in general. They are bitter rivals of the Jones Street Boys, who hail from Bensonhurst.

The female members of the gang do not appear by themselves or outside of the Boppers' main hangouts, and they are overall less aggressive than the male members, only joining in fights if they must. They dress much differently from the male members also, with seemingly no particular dress code applied to them, though most seem to gravitate towards tight and revealing attire. None appear to have any rank, and they also appear to be treated very poorly by the male members, as a female member is once seen being grabbed by the wrist and twice called a "bitch" by Reggie, a male lieutenant, and then slapped across the face by Reggie for talking back to him and for trying to escape from his grasp. The same scene also implied they are involved with pimping.

The Boppers were formed sometime before August 18, 1978, and adopted Harlem in Manhattan as their territory.

On August 18, 1978, Cochise was sent to Harlem as part of his initiation into the Coney Island-based gang the Warriors. Several groups of Boppers battled Cochise and Snow, who were searching for a size nine hat worn by a member of the Boppers. Cochise and Snow were able to defeat the Boppers, and made their way to the Roman Disco, where they confronted the Boppers lieutenant Reggie and interrogated him to learn that the leader of the Boppers was Big Moe. In search of Big Moe, Cochise and Snow made their way to The Pocket pool hall, where they defeated another group of Boppers and then interrogated lieutenant Boxcar to learn that Moe could sometimes be found at The Black Cat, a nearby strip club.

On May 20, 1979, the Boppers battled the Judas Bunch in Harlem, and emerged victorious. The Boppers' victory was later reported by the D.J. on the gang radio station.

On June 30, 1979, the Boppers battled the Jones Street Boys in Bensonhurst. The D.J. later mentioned this battle on the gang radio station.

When Cyrus and the Gramercy Riffs called a conclave of New York City's street gangs, the Boppers were one of the gangs that were invited to the meeting. Nine members of the Boppers made their way from Harlem to the meeting in Van Cortlandt Park, the Bronx; there, the gang witnessed the death of Cyrus.

Their only appearance in the film was in the opening sequence as an one of many attending gangs in the big meeting, they are seen walking down a subway platform.

They appear in Sharp Dressed Man. When Cochise and Snow go to Harlem to get a size nine Bopper's hat for Cochise's initiation into the Warriors.

They appear in the cutscene for the mission All-City where they talk with a Riff about Cyrus' meeting.

They can be seen going, attending and leaving Cyrus' meeting in the cutscene for the mission Desperate Dudes. 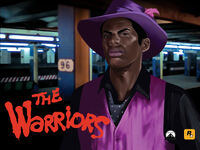 Chochise fighting against some Boppers
Add a photo to this gallery
Retrieved from "https://thewarriors.fandom.com/wiki/The_Boppers?oldid=18845"
Community content is available under CC-BY-SA unless otherwise noted.