Swan is the current Warriors' Warlord (former Main Lieutenant). He is a man of few words. A loner willing to step up when it counts. He was played and voiced by Michael Beck.

Swan is a young man with a wiry build, long light-brown hair, and light-brown eyes. He wears the Warriors vest with no shirt, brown jeans and black shoes.

Swan has a very calm demeanor. He is usually all business, nearly always serious. He is a strong leader and very loyal to the Warriors. However, he is more complex than he might seem at first, disliking Mercy at first but later softening up to her. He also muses on the quality of his life when he comes back to Coney Island saying "This is what we fought all night to get back to?" Swan is also challenged for leadership by Ajax, but Swan won that confrontation by staring Ajax down with his intensity. His leadership skills are what made Cleon consider him for the position of Warchief.

His largest part in the story is the events at the meeting in the Bronx, having to lead the Warriors back home to Coney through enemy territory after being wrongfully blamed for shooting Cyrus. Following Cleon's death, he leads the gang through escaping Gunhill, the scuffle with the Orphans, also meeting Mercy. He also fought against the Baseball Furies in Riverside Park, and the Punks in the Bowery. He also faced the Rogues on the Coney's beach, stabbing Luther in the arm wrist with a switchblade knife.

Swan and Cowboy were good friends, and members of the Destroyers. After growing distrustful of Virgil, they leave the gang, but not before warning Cleon.

Cleon and Vermin soon left the Destroyers after being betrayed by Virgil. They then started their own gang, the Warriors. When they meet Swan and Cowboy at a King of the Hill tournament, which Swan and Cowboy won, Cleon offered a position in the gang to Swan and Cowboy, which they accepted. After that, Swan was a major figure in the events of The Warriors, helping secure their power in Coney, and fighting alongside them as Cleon's second-in-command.

In the book, his counterpart, Hector, is different from Swan. Hector is Hispanic, and more angry and mean. He doesn't make it back to Coney, he instead rapes a girl, and ties to rape a fat nurse, and ends up in jail with Lunkface and Bimbo.

Swan still maintains his Warlord position and often visits Mercy in her apartment. After a brawl with the Hi-Hats, Swan decides to break Ajax out of jail. He leads the Warriors to the prison in Bronx, where he is met by Masai and the Gramercy Riffs. They work together to spring Ajax and two imprisoned Gramercy Riffs from jail. Swan frees Ajax then speaks to Masai, saying that the unified gang could still work, but Masai says that dream died with Cyrus. Swan asks Mercy to come back to Coney, who yells at him for the bruises he received during the prison break. Back at Coney, Ajax thanks him and accepts the fact that he is leader. Mercy finds him after and tells him she is moving back to Coney with him.

Swan is one of the top fighters in The Warriors. Some of his moves are similar to those of Cleon, and his Strength, Stamina, Health and Rage are only a bit smaller than Cleon's. Swan, Cochise and Rembrandt are the only characters in the game that don't share any of there grapple moves with anyone.

Swan has a unique trait, in that his light-light-heavy fighting combo is exclusive to only him. He shares his fighting stance with Cowboy, Rosie, and most males. However, Swan and Cowboy draw their fists more quickly than others.

He is the first player character in Armies of the Night. He is also playable in Street Brawl. 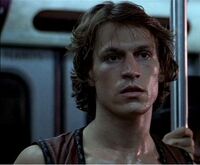 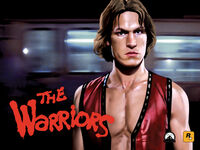 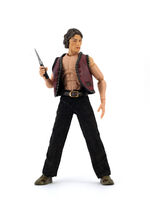 Ghost Swan.
Add a photo to this gallery
Retrieved from "https://thewarriors.fandom.com/wiki/Swan?oldid=20534"
Community content is available under CC-BY-SA unless otherwise noted.