Snowball, commonly known as Snow, is a heavy muscle and later Main Lieutenant of the Warriors. He is a real heavy soldier. Disciplined, independent and reserved. He can rumble with the best of them. He was played by Brian Tyler and voiced by Sekou Campbell.

Snow has an Afro with a headband under it, and he wears necklace with no shirt with under his vest. Snow is the tallest member of the Warriors. He has a lean and wiry, yet still muscular build, as opposed to his partner Ajax's stocky and bulky build.

In the movie, Snow is very quiet. However, in the game, he is much more boisterous.

Snow is able to be cool under pressure, hence the name. He rarely speaks, but when he does, he usually says something meaningful or wise.

Unlike his heavy muscle partner Ajax, Snow is more rational, and clearly more intelligent, making him a more promising leader. Like every other Warrior, he is very loyal to the gang, and is willing to help each one of his Warrior brothers.

After the meeting, the gang split up and he went with Cowboy, Ajax, and Swan, where they fought the Baseball Furies at Riverside Park. Snow was able to make it back to Coney at the end of the movie.

Snow joined the Warriors on June 15, 1978, where he and Ajax had to fight off a number of Warriors to be in. After they earn their colors, Ajax took him to Destroyers' turf to meet Ajax's girlfriend (Ajax lied to Snow saying there would be two girls). Then, a bunch of Destroyers knocked them down and took their vests, and the two had to fight through Destroyer turf to get their colors back. He was able to get his vest back from Lemmy (a Destroyer lieutenant).

The character that most resembles Snow in the novel is Bimbo. Bimbo is the advisor of the gang. Unlike Snow, Bimbo doesn't make it to Coney Island, he is instead arrested for attempted rape.

Snow appears multiple times in Jailbreak, but has no speaking lines.

Snow is a heavy muscle. He is strong and is often a big help in brawls. His fighting style is just like that of Ajax, and most males in the game. He shares the same ground head-butt combo as Rico, Sanchez, Sid, Thrash. He also shares his fight stance with Fox.

Furthermore, his standing rage grab combo is shown to be one of the most brutal in the game, as he snaps his opponents' forearms back, before pounding them into submission. His ground rage combo is the most powerful in the entire game; usually, only the final blow of a rage combo does the trick, but the 2nd and 3rd blows of Snow's ground rage combo deplete masses of health, rather than just the 3rd. His power moves are the standard roundhouse and tornado kicks.

There is an error of sorts with his standing rage combo; when he breaks someone's forearms, they will only lose a tiny bit of health from it, and they'll get back up and fight. In reality, this attack would prompt them to scream in agony, and render them useless in a fight, not to mention that it would take ages for the arms to heal, not just instantly. This also happens with Cowboy's standing rage combo.

There is an odd gimmick in 1 ON 1, in Rumble Mode; if you play as Snow, and manage to fill your rage meter without dealing much damage to your opponent, you can perform the ground rage combo on them (which includes a neck-break) and they'll still have a bit of health left.

Despite being a heavy muscle, he is only the fourth-strongest Warrior (in the game universe, at least); Ajax, Cleon and Swan are stronger than Snow, in that order. Snow is no more than a little bit stronger than the average character. 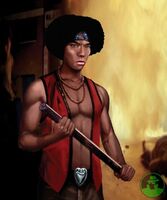 Add a photo to this gallery
Retrieved from "https://thewarriors.fandom.com/wiki/Snow?oldid=20164"
Community content is available under CC-BY-SA unless otherwise noted.