Luther was the leader of the Rogues and the main antagonist of the film. He was played by David Patrick Kelly, and voiced by Oliver Wyman in the game.

Luther wears his Rogues waistcoat and a large bandana. His weapon of choice is his revolver, which he acquired from a murdered police officer. He has long brown hair and grey eyes.

Luther's personality is often compared to the personality of a schoolyard bully. His most outstanding attitude is that he is psychotic, yet also cowardly. He is shown to be a very cowardly character, as he left Tommy and Patches to fight a horde of Furies during the blackout.

He was the one that shot Cyrus and framed the Warriors for it, because Fox saw him. Luther hears about the bounty on the Warriors and is only too pleased to help capture or kill them. Later, at Coney Island, the Rogues catch up with the Warriors and challenge them on the beach. Instead of fighting, Luther pulls out the same revolver that he killed Cyrus with, and aims it at Swan. Swan throws a switchblade at Luther, impaling his forearm. The Riffs then arrive and take control of the situation, letting the Warriors leave in the process. Luther's fate is then left undetermined, though he was most likely wasted by the Riffs at the end of the film.

Luther is shown in several cutscenes talking to the other Rogues and someone on the phone. Apparently, he left Tommy and Patches behind, leading to them getting beaten up by the Baseball Furies, during the Riverside blackout.

The game also shows that, even before the Rogues crossed paths with - and framed - the Warriors, he unintentionally framed other gangs; the Turnbull AC's and the Jones Street Boys, after killing a cop in Pelham and taking his gun and badge.

The Rogues catch up with the Warriors and challenge them on the beach. Swan has a solo fist fight with Luther, but after Luther learns that he is losing, he pulls out a revolver and aims it at Swan. Swan throws several bottles to decrease his health and, after his health has lowered enough, Swan takes out a switchblade and throws it at Luther,making him release the revolver. During the credits, Masai and the other Riffs beat the Rogues up, with Luther begging for them to stop.

No character like Luther appears in the novel, as Ismael Rivera (Cyrus) is killed by several gang members, when they believed he had informed the police of the meeting.

In Rumble Mode, his AI is different from the standard AI, as he sprints around the arena, aggressively grabs a random gang member, and does his trademark special moves.

His standing grapple move is to jump on a person's back and punch their head, while his ground grapple move is a deadly ground barrage, which is proven to be tied with a standard Bopper's rage special move. He also has his own unique fighting style.

Like other Rogues, Luther has high attack power equal to that of Cleon or Swan. However, his health is lower than his gang members in Rumble Mode, which makes him the only Warlord to have such a trait.

When playing as Luther in rumble mode, he can dodge/block all attacks even from weapons, except for ranged weapons.

Pointing his gun at Fox

Luther confronts Swan at the beach 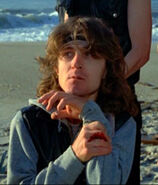 Luther injured by a switchblade

Artwork in the game.

His appearance in the game
Español
Community content is available under CC-BY-SA unless otherwise noted.
Advertisement