Fox was the scout of the Warriors. He was the memory man. Street smart and quick-witted; a perfect scout. He was played and voiced by Thomas G. Waites.

Fox is a small, thin, Caucasian male with curly brown hair, blue eyes and a chain around his neck. He wears his Warriors vest buttoned up, unlike the majority of other members of the gang.

﻿Fox is very streetwise and intelligent, knowing many things about all the other gangs. He is also very cautious, preferring to not get into fights, unlike some other members. This makes him an excellent scout. Fox is also very passive, really only showing aggression when calling Mercy a whore.

Fox was one of the nine Warriors to go to the meeting in the Bronx. He actually witnessed Luther shooting Cyrus and narrowly avoided being shot himself. His next role in the movie was in Tremont negotiating with the Orphans. He actually managed to flatter the Orphans into letting them pass peacefully until Mercy riles them up. When the gang is split up, Fox is attacked by a police officer, and gets into a scuffle, causing him to get tossed on the tracks. Fox was mutilated by a subway train, and died on July 13, 1979.

﻿Fox joined the Warriors on July 22, 1978, as shown during Flashback D. His initiation was to steal the Savage Huns' loansharking book in Chinatown. Vermin was told to accompany him, due to doubts about his physical abilities. To add to the challenge, both of them had to wear shirts that boldly displayed the phrase "Fuck U Huns!". They were able to get the book, and even beat the Savage Huns' leader, Ghost, in a fight.

﻿When The Orphans, lied about wrecking the Warriors on the radio, Cleon took Fox, and a few rookies, to show them who's tougher. This was shown in Real Heavy Rep. Later in the game, Fox appeared in the same places as the movie; during missions 14 - 16. At the intro for Home Run, he was killed by a train, just like the film showed.

﻿Strangely, Fox appears to have a lot more muscle than in the film.

There is no character in the novel that resembles Fox, as the Coney Island Dominators have no scout.

On the subway ride to the prison, Swan thinks about Fox. Rembrandt tells him that Fox was taken in by a cop, potentially to prevent Swan's from being sad or potentially because he believes he survived.

Fox's strength comes more from his mental ability, rather than physical. While not a particularly strong fighter, Fox can certainly hold his own in most fights. His rage moves shows that he has knowledge of submissions. He is shown to be skilled enough to defeat the admittedly skilled Savage Huns and their leader Ghost.

His 2-hit knee combo is also used by Destroyers officers. Like Rembrandt, his power move is the weak push, while his rage power move is an equally weak foot-trip move, similar to Deke's power move, and Ghost's secondary power move.

He, Rembrandt, Cowboy and Vermin have a special raging animation, which lasts longer than the standard animation. This can be disadvantageous, especially for Fox and Vermin, as rage time is wasted on waiting for the animation to end. He shares his fight stance with Snow. 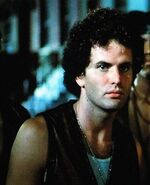 Fox falling to his death.

Ghost Fox.
Add a photo to this gallery
Retrieved from "https://thewarriors.fandom.com/wiki/Fox?oldid=20162"
Community content is available under CC-BY-SA unless otherwise noted.