Cyrus was the president of the Gramercy Riffs. He was played by Roger Hill. He was the Warlord of the Gramercy Riffs, with Masai as his Main Lieutenant. He is well-spoken and adept at public speaking, and considers himself a spiritual leader to the street criminals of New York City. He sees the possibility of uniting the gangs under a general truce, believing that, if the gangs were not fighting each other, they could intimidate and extort protection money and privileges from law enforcement and organized crime in the city by the advantage of numbers alone, with the Gramercy Riffs all acting as his delegates and lieutenants to keep order among the gangs, while he personally oversees the profits and power that would surely come from such a vast operation.

In The Film[edit | edit source]

Cyrus is the president of the Gramercy Riffs, and the man responsible for calling the meeting in Van Cortlandt Park. However, this vision was shattered when he was shot and killed by Luther while giving his speech at the summit.

In The Game[edit | edit source]

Cyrus is seen several times explaining his plan to Masai. He is talked about often by the radio DJ, who sometimes refers to him as "Magic Man".

After the prison break, Swan talks to Masai about continuing the plan of a unified gang, but Masai said Cyrus' dreams died with Cyrus. 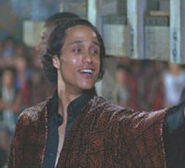 Fan art of Cyrus drawn in the style of a Dr. Seuss book by DrFaustusAU.
Add a photo to this gallery
Retrieved from "https://thewarriors.fandom.com/wiki/Cyrus?oldid=19737"
Community content is available under CC-BY-SA unless otherwise noted.