Cowboy is a soldier and former lieutenant of the Warriors. He is a voice of reason and goes along with the group, always wearing a Stetson hat. He was played by Tom McKitterick and voiced by Kurt Bauccio.

Cowboy is a Caucasian male, with medium-length brown hair, and wears a Stetson cowboy hat, with a brown T-shirt under his vest. He doesn't have as good of cardio as other members of the Warriors, as shown during the fight with the Baseball Furies, except he protects himself with a Bat against the punks.

Cowboy is laidback and easy-going, always going with the flow. He seems to be sensitive about his hat, always being rather distraught when it is taken away from him.

In the movie, Cowboy goes with Swan, Ajax, and Snow when the Warriors are split up. He is chased by the Baseball Furies, but becomes exhausted and is knocked down by them. However, during the brawl with the Punks, Cowboy shows his strength and helps defeat them. Cowboy returns safely to Coney at the end of the movie.

After leaving the Destroyers with Swan, they entered a King of the Hill competition on May 6, 1978. Cowboy and Swan were victorious, and they joined the Warriors that night, and helped secure their power base and get their hangout from L.C. and the Destroyers.

Cowboy resembles no character in the novel, so it is assumed he is an original character. The only comparison in the novel is Lunkface, as they are both sensitive about their hat, although Lunkface is far more similar to Ajax.

Before busting Ajax out of prison, Cowboy tells D-Train that if he gets caught or killed, to not let the police get his hat.

Cowboy is not the strongest of the Warriors, but he is certainly not the weakest (he is the second weakest). His fighting style is more of a classic street fighter - the same style as that of Rembrandt and the Hurricanes. Cowboy is strong enough to win the King of the Hill competition, and beat the Punks, as well as various other gangs of New York City. He shares his fighting stance with Swan, Rosie, and most males. However, Swan and Cowboy draw their fists more quickly than others.

He is the only character in the game who uses his two unique power moves, along with Vermin. His standard power move is somewhat several punches in one move, whilst his rage power move is a spinning punch. Unlike Vermin however, Cowboy's rage power move seems to go under his opponent, towards the chest, whilst Vermin seems to go for the head, despite them both having the same animation. This is judged by the way their respective opponents fall over when attacked with the punch.

His rage ground finishing move is the same as the regular ground finishing move for the Destroyers soldiers, including LC. He has a special raging animation, which lasts longer than the standard animation. This animation is also shared with Rembrandt, Fox and Vermin. This can be disadvantageous for the other three, as rage time is wasted on waiting for the animation to end. However, for Cowboy, it doesn't matter as much, as his rage time is so long, he could perform 4 broken forearms in 1 sitting, if you're quick enough with him.

There is an error of sorts with his standing rage combo - as when he breaks someone's forearm, they will only lose a tiny bit of health from it, and they'll get back up and fight. In reality, this attack would prompt them to scream in agony, and render them almost useless in a fight, not to mention that it would take ages for the arm to heal, not just instantly. This also happens with Snow's standing rage combo.

In rumble mode, he does superior damage when using weapons, compared to other characters, and even other Warriors. 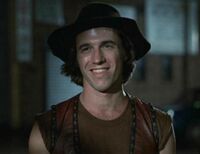 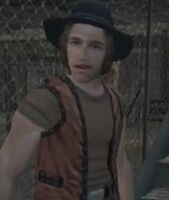 Add a photo to this gallery
Retrieved from "https://thewarriors.fandom.com/wiki/Cowboy?oldid=20165"
Community content is available under CC-BY-SA unless otherwise noted.