Cochise is a soldier of the Warriors. He is a real live soldier, looking for a good time and all the action he can handle. He was played and voiced by David D. Harris.

Cochise has a more tribal style to his Warriors outfit, wearing a long darker red bandana with a unique gold design around his head with a somewhat large Afro. Cochise also wears multiple necklaces, along with two armbands, and two feather earrings. He wears red-colored pants, and big brown boots.

In the movie, Cochise is somewhat of a mediator between other members. He shows that he can be serious yet also have a joking manner about him which is shown when all the members mess around on the subway train in the opening scenes. He is impulsive when it comes women, which is displayed in the scene where he, Vermin, and Rembrandt follow the Lizzies back to their apartment. However, in the video game, Cochise is more of an aggressor, showing this in Sharp Dressed Man.

Cochise also shows leadership capabilities and patience as well, as in the Mission Boys In Blue, rather than attacking blindly with just him and Vermin, he asks Cowboy to take Fox and Snow back to Coney to have their wounds treated and send backup led by Ajax, effectively taking revenge against the Turnbull. In Jailbreak, he led a second group of Warriors and all return unscathed.

Cochise is a soldier, who was one of the nine delegates. He makes the mistake of relaxing with the Lizzies, but fights very well against the Punks, and manages to make it back to Coney.

Cochise's past is told in the video game rendition of The Warriors. It is stated that he is from Harlem, but later moved with his mother to Coney Island, where he ran into the Warriors. Soon after, he demanded to gain membership into the gang, but was shot down immediately by Vermin. After a few jokes between the members, Cleon then tells Cochise that, if he can steal a size-nine hat off a Bopper's head, he could join the Warriors. He then goes back to Harlem, along with Snow, who he was sent with to help in search of a Bopper's hat. Cochise then faces a few of the gang's lieutenants, Reggie and Boxcar, in search of the size nine Bopper's hat. Cochise discovers who would wear such a size, Big Moe. He defeats Big Moe, taking his hat. Snow approves of him joining the gang, and then is a part of the Warriors on August 18, 1978.

Cochise assists in almost all brawls. During the jailbreak of Ajax, he was in charge of bringing the second group to the prison.

The character that most resembles Cochise in the novel is Dewey, who is the mascot of the gang. Cochise could be seen as a mascot for his very tribal appearance that makes him stand out most. Unlike Cochise, Dewey is the youngest and most level-headed of the gang.

Cochise is a strong fighter in the game. His stamina is fairly high, along with his strength and rage. His fighting style is more an emphasis to Muay Thai or Taekwondo, as he uses more kicks than punches, giving speed in his strikes. He is playable in a couple of missions throughout the game, and partakes in several key fights.

Cochise is not as strong as the Warriors' executives and heavy muscles (Ajax, Cleon, Swan and Snow), but is on par with Vermin, and is stronger than the other three (Cowboy, Fox and Rembrandt). However, Cochise can use 3 strikes in grapple combos, instead of just 2, essentially making him more reliable than Vermin in that field.

Oddly, when performing his unique standing rage combo, he makes pain sounds, rather than attack grunts.

He is playable in Street Brawl. 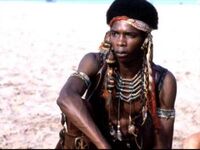 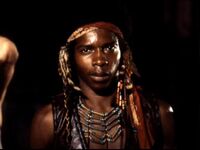 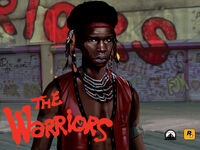 Flashback Cochise.
Add a photo to this gallery
Retrieved from "https://thewarriors.fandom.com/wiki/Cochise?oldid=20163"
Community content is available under CC-BY-SA unless otherwise noted.